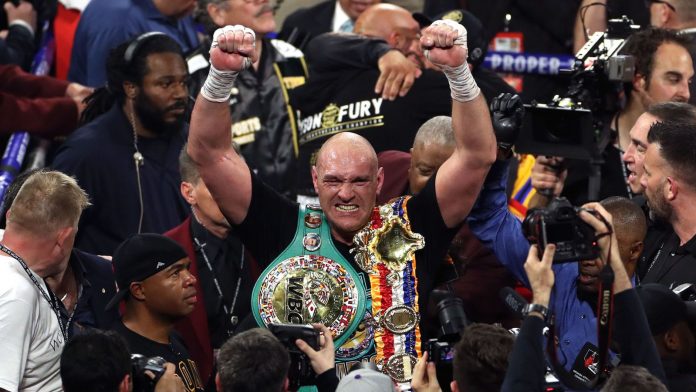 Watch The Highlights Below.

Fury dominated throughout the rematch at the MGM Grand arena before Wilder’s corner threw in the towel in the seventh round, capping a remarkable career comeback for the 31-year-old.

The Mancunian – who once held all four world title belts – dethroned Wladimir Klitschko back in 2015, before his time at the top of the sport was derailed by depression and addiction as he reached an estimated 27 stone.

The victory also comes 14 months after Fury’s controversial draw with Wilder in LA – when he outboxed the WBC champion only for two knockdowns to deny him the famous green belt.

The 6ft 9in Fury vowed to take the fight to the 6ft 7in Wilder this time round – and he did just that, flooring the champion twice and completely dominating the action.

The Briton, 31, pummelled his rival in a way few could have imagined following their 2018 draw, flooring him in the third and fifth rounds while constantly backing up the most-feared puncher in the division in a way no-one has done before.

A jab and right hand – the combination with which Wilder has wiped men out repeatedly – sent the American down in the third, stunning the MGM Grand Arena.

Wilder, making his 11th defence, fell again before the round was out – this time a slip – and looked ragged under the pressure, before a left hand to the body sent the 34-year-old down in the fifth.

Fury delivered everything he had promised, transitioning from his hit-and-move style to overpower, outwork and bully his previously undefeated rival until the towel came in during the seventh round.

This was more than a world title win, it was a statement – and as Fury was held aloft by his corner after victory was sealed, the days of depression, weight gain and despair that cost him the belts he claimed in 2015 seemed a lifetime away.

Below Is The Full Fight

Deontay Wilder: “The best man won on the night. My coach threw in the towel but I’m ready to go out on my shield.

“I had a lot of things going on coming into this fight but it is what it is.

“I just wish my corner would have let me go out on my shield, I’m a warrior. But [Fury] did what he did and there’s no excuses.”

Tyson Fury speaking to BT Sport Box Office: “I told everybody with a pair of ears that the Gypsy King would return to the throne. My last fight everybody wrote me off. I was underweight and over-trained. I’m a destroyer. Not bad for someone with pillow fists.

“I’m a man of my word. I told Wilder, his team, the world. We trained for a knockout; we wasn’t tapping around in that gym.

“I talk like this because I can back it up. People write me off, they look at my fat belly and bald head and think I can’t fight. He fought the best Tyson Fury, we’re both in our primes.

“I expect him to ask for the third fight. I know he’s a warrior and I’ll be waiting.”